Be the first to review this product
As low as $6.06
In stock
Only %1 left
SKU
GRM258
Buy Aerocort Inhaler 50 Mcg + 50 Mcg (Aerocort Inhaler, Beclomethasone Dipropionate + Levosalbutamol) online at best price .which is used for asthma
Skip to the end of the images gallery 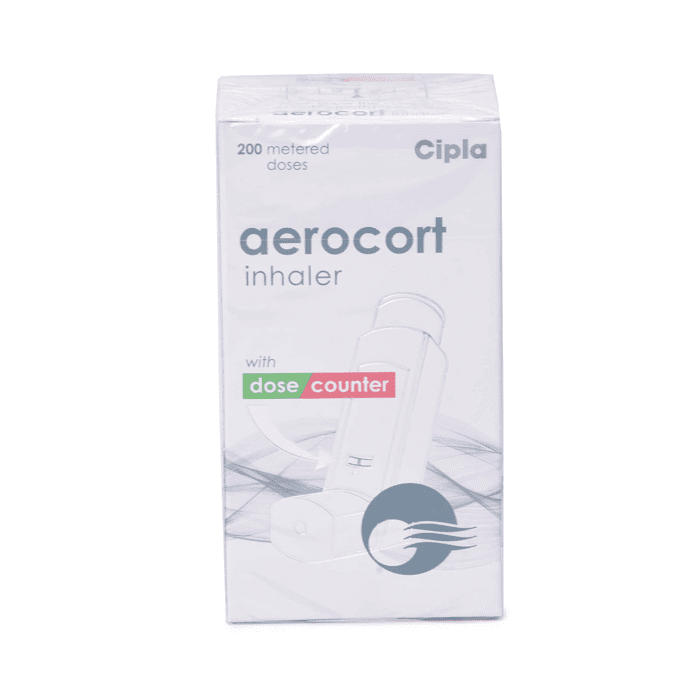 Aerocort inhaler is one of the branded product of Cipla, India. It consists of beclomethasone dipropionate and levosalbutamol in the dosage strength of 50 + 50 mcg. The combination of these two drugs is used in the treatment of asthma. The product is available in the USA market with the similar brand name, i.e., aerocort inhaler. The packaging of the product comes in the form of 200 doses of inhalation. The combination is FDA approved and can be purchased only with the prescription of a registered medical practitioner. The patient can purchase the inhaler from drug stores, hospital pharmacies, and e-pharmacies.

Levosalbutamol and beclomethasone dipropionate the active pharmaceutical ingredients of the formulation have different therapeutic action in the treatment of asthma. Levosalbutamol is the active (R)- enantiomer of racemic salbutamol which belongs to the beta-2 agonist category of drugs. It works as a bronchodilator. Beclomethasone dipropionate belongs to glucocorticoid category of drugs. It possesses potent anti-inflammatory properties. It also contains weak mineralocorticoid properties. The combination of salts are suspended in the propellant HFA-134a. Propellant helps in the upward movement of molecules when the patient inhales the drug. Metered dose inhalers benefit in the term of delivery of the exact quantity of drugs into the lungs.

The two salts of aerocort inhaler show additive effects. Levosalbutamol smoothens the air flow from the trachea to the terminal bronchioles, i.e., covers the whole air passage. Patients suffering from asthma face inflammation in the chest and lungs along with the shortness of breath. Therefore, administration of a corticosteroid along with bronchodilator is considered necessary. Corticosteroids prevent inflammation by inhibiting inflammatory cells (mast cells, eosinophils, basophils, lymphocytes, etc.) as well as inhibiting the release of inflammatory mediators (histamine, eicosanoids, leukotrienes, etc.). Beclomethasone dipropionate shows its action after conversion into beclomethasone 17 monopropionate before absorption into the lungs. 17-BMP shows more significant affinity to receptors over its substitutes such as 13 times of dexamethasone, 1.5 times of budesonide, and 25 times of BDP.

Aerocort inhaler is used to treat a medical disorder of asthma and chronic obstructive pulmonary disease. It is available in the dosage form of an aerosol inhaler.

Side effects observed with the use of aerocort inhaler are:

The category of drugs which can interact with this bronchodilator combination are:

Avoid the use of aerocort inhaler in the following conditions:

Does the use of steroid inhaler cause white patches in the mouth?

Ans. Yes, the long term usage of corticosteroids in the form of inhalation can form white patches in the mouth over inside portion of the tongue.

Does aerocort inhaler administer the same quantity of drug in every puff?

Ans. Yes, it is a metered dose inhaler. A measured quantity of drugs reaches the lungs with every puff.

Can the use of drug be stopped abruptly without the knowledge of the doctor?

Ans. No, the use of bronchodilators and steroids cannot be stopped immediately without consulting with the doctor. It may cause withdrawal symptoms in the body.