Be the first to review this product
As low as $21.21
In stock
Only %1 left
SKU
GRM108
You love the pleasure and we have Cenforce 50 mg which contains Sildenafil Citrate used for erectile dysfunction treatment. Know Sildenafil side effects
Skip to the end of the images gallery 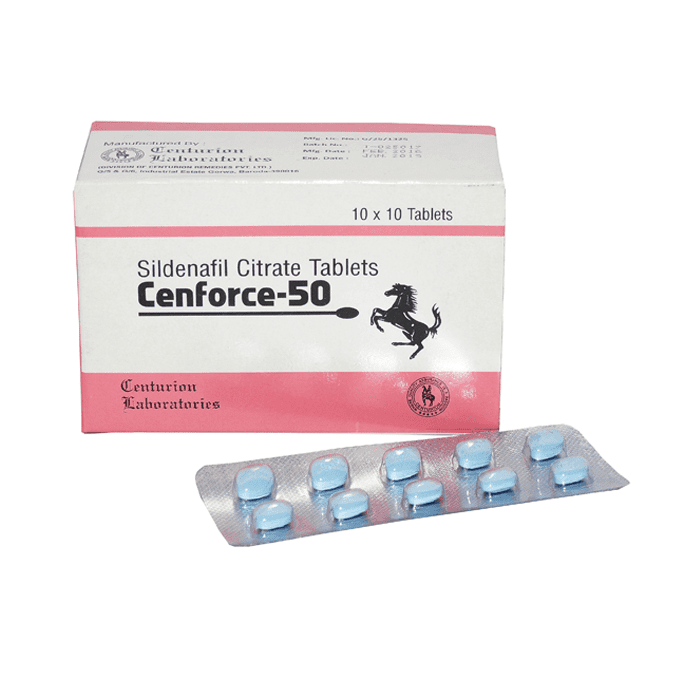 About brand  name of the drug

Cenforce 50mg (Sildenafil) is a brand manufactured by Gujarat based Indian company named Centurion Laboratories Ltd. They are available in the form of oral pills or tablets. It is generally used by men facing the problem of Erectile Dysfunction(ED). ED is the inability to sustain a satisfactory erection to complete intercourse. It is the preferred drug of choice to treat the problem of impotence and sexual inability in men.

The Active Pharmaceutical Ingredient present in Cenforce 50mg is Sildenafil citrate. Sildenafil citrate is a salt form of Sildenafil with therapeutic properties. Cenforce is available in variable number of strengths like 25mg, 50mg, 100mg, 130mg, 150mg and 200mg. The drug is easily available in all the medical stores, drug and chemist stores. It can also be purchased online on various e-pharmacies.

Sildenafil citrate is a PDE5 Inhibitor (phosphodiesterase). It relaxes the

blood vessels of smooth muscles of certain parts of the body. As a result, blood flow to such parts are enhanced. It acts as a potent agent for prolonged penile erection due to its dilation property. Sildenafil citrate is used to treat various conditions like:

Cenforce 50mg is used for the treatment of the following medical conditions:

Cenforce 50mg contains Sildenafil citrate which is a PDE5 inhibitor. PDE-5 is responsible for the breakdown of cGMP produced as a response to sexual stimulation. Sildenafil citrate increases the level of cGMP thus increasing the blood flow in the penile region. The ability of the penis to maintain its erection is increased. Thus, the prolonged time of erection of the penis eventually leads to better sexual performance and satisfactory sexual experience.

Cenforce 50mg must be taken only after consultation with a registered medical practitioner. The instructions that are given by the doctor must be followed. While taking the drug some instructions should be kept in mind like:

It should be stored in a cool and dry place, away from the reach of the children.

Drug interactions are very common when two or more drugs are taken together. Some potent drugs that can cause interaction with Cenforce 50mg (Sildenafil citrate) are -

Cenforce 50mg (Sildenafil citrate) should be avoided in patients who have pre-existing cardiovascular disease. Patients who have suffered from myocardial infarction, stroke or arrhythmia in the last 6-8 months should avoid using Cenforce.

While taking Cenforce, consumption of certain things should be avoided like

Cenforce 50mg (Sildenafil citrate) should be stored at room temperature which is generally ranging between 20 to 25-degree centigrade.

Ans: For a large number of male populations it has found to be effective. The starting dose of 50mg helped around 74% of men to retain a firm erection for successful sexual intercourse.

Is Cenforce 50mg can be purchased with the help of prescription-only?

Ans: The 50mg dosage can be purchased as an over the counter drug but for lower and higher doses like 25 mg and 100 mg respectively, a prescription is necessary. In USA, Cenforce can only be bought with the help of prescription as the doctor needs to check the suitability of the patient to the drug.

How long does the effect of Cenforce 50mg last?

Ans: The usual effect lasts up to 4 hours after which it begins to fade slowly.

Is there spontaneous interaction after 30 to 60 minutes?

Ans: NO, cenforce does not work like that it works with natural stimulation. If there is no sexual stimulation, no erection will occur.

Does Cenforce has any effect on orgasms?

Ans: NO, Cenforce does not has any effect orgasms.

Does the use of Cenforce results in increased libido or sex drive?

Ans: NO, Cenforce has no effect on libido or sex drive. Psychological tests have been done which reveals that there is no increase or decrease in the libido of a person.