Be the first to review this product
As low as $52.72
In stock
SKU
GRM179
Skip to the end of the images gallery 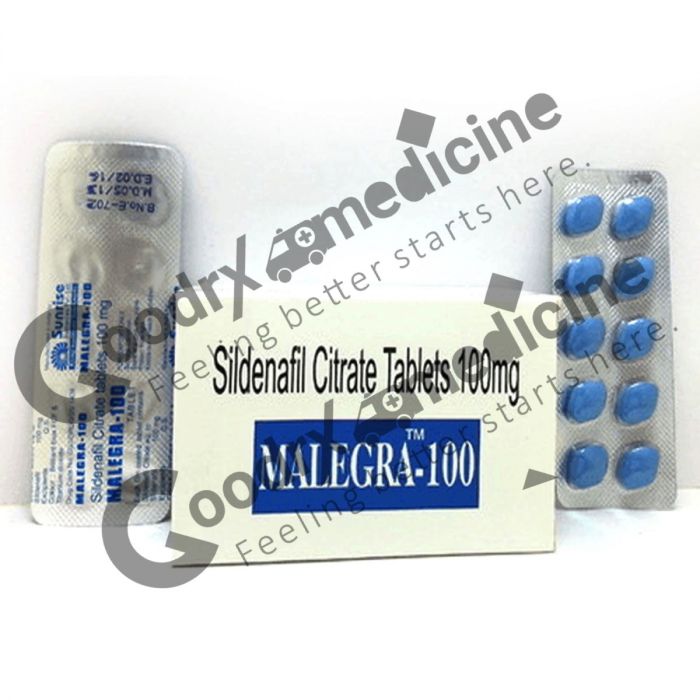 Malegra 100 mg contains Sildenafil as the active component of the tablet which is responsible for the treatment of erectile dysfunction. It contains Sildenafil which is equivalent to 100 mg on a dried basis. Brand Malegra is available in varying strengths which are 50 mg, 100 mg and 120 mg. It is one of the most prescribed medications which is used for sustaining erections for a long duration of time.

The active component of Malegra 100 mg which is Sildenafil is manufactured as a citrate salt. This result in increasing the stability of the drug and its absorption takes place at a faster rate. As a result, Malegra 100 mg shows its effects within one hour after consumption.

Blood flow to the penile region decreases due to constriction of blood vessels which is primarily due to inhibition of cGMP protein by phosphodiesterase type 5 enzyme. Malegra 100 mg functions by inhibiting phosphodiesterase type 5 (PDE5). Malegra 100 mg inhibits PDE5 and results in dilation of the blood vessels in the penile region. As a result, it is observed that blood flow improves and remains steady for a long period of time. Erections can be easily sustained by the male partner for a prolonged period of time as well as sexual pleasure is achieved.

Consumption of Malegra 100 mg may cause the following side effects which are very normal and may be seen in any individual:

Consumption of Malegra 100 mg along with one or more of the medications given below may result in serious life-threatening conditions:

Note: Along with side effects there is the possibility of having a painful erection for more than four hours due to the consumption of Malegra 100 mg.

Disclaimer: Always consult with your nearby doctor before consumption of this medication. The doctor should have a clear knowledge of your medical history if you are consuming any one of the above medications.

Malegra 100 mg is not supposed to be consumed in patients suffering from:

Malegra 100 mg is not supposed to be stored above a temperature of 30oC. Prevent exposure to sunlight and moisture.

How long does it take for Malegra 100 mg to work?

Ans. Malegra 100 mg effects are visible 30-45 minutes after consumption of the medication. Sustained erection is produced which help both the partners to achieve sexual pleasure.

Would Malegra 100 mg be more effective if taken more than the recommended dose?

Ans. No, taking higher doses of Malegra 100 mg would not cause any further improvement. Rather it will cause excessive side effects and may even give rise to long and painful erections.

Would fertility be affected due to the use of Malegra 100 mg?

Ans. No, Malegra 100 mg is only used for sustaining the hard penis for a long period of time and has no relation with the fertility of a person.