Be the first to review this product
As low as $56.36
In stock
Only %1 left
SKU
GRM271
Duratia 60 Mg has Dapoxetine, a new antidepressant, which is safe and effective for the treatment of premature ejaculation. Buy from our online pharmacy
Skip to the end of the images gallery 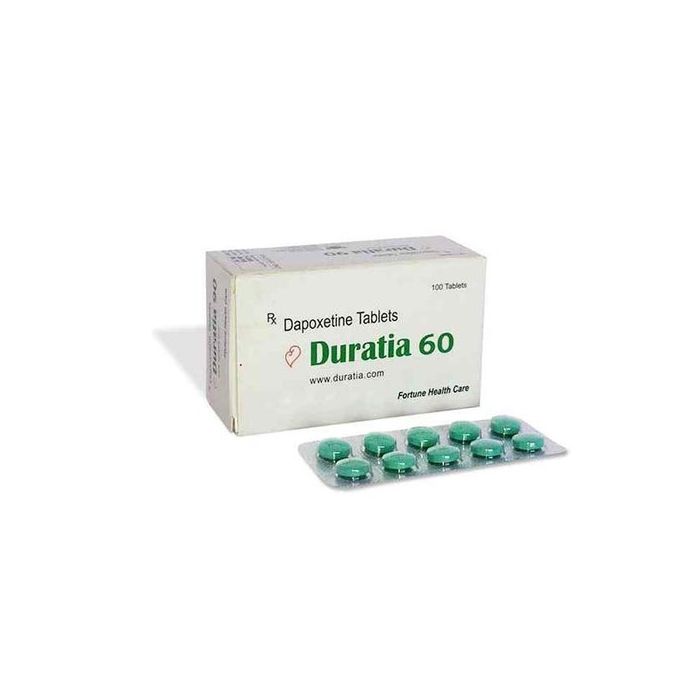 Duratia is a drug manufactured by Fortune healthcare India and is available as Priligy in the USA. Duratia is a schedule H drug, which means prescription is required to purchase the drug. Duratia contains a salt called Dapoxetine, which is used to treat premature ejaculation in men of age from 18 to 64 years.

The active pharmaceutical ingredient of Duratia is Dapoxetine, which is present in 60 mg amount. Duratia 60 mg (Dapoxetine) is classified under the class of selective serotonin reuptake inhibitors which showed efficiency in thousands of male patients suffering from premature ejaculation problem. Duratia are tablets which are taken orally and come in a strip of 10 tablets each. A pack of 60 tablets costs around $ 57 in the USA. It is available easily on online pharmacies.

Dapoxetine, as mentioned earlier is a drug used to treat the problem of premature ejaculation is male of age from 18 to 64. It was originally produced by a company called Eli Lilly Pharmaceuticals, which later sold it to Johnson & Johnson. Dapoxetine is an SSRI (selective serotonin reuptake inhibitors), which were originally developed to combat depression and are still drugs of choice for the same. Dapoxetine finds its use in treating premature ejaculation as well. It raising the level of serotonin in the brain, enhancing the control over ejaculation and having beneficial effects on sexual life.

Talking in general about the drugs in SSRI (Selective serotonin reuptake inhibitors), these are used to treat depression and are the drug of choice for the same. Serotonin is a hormone in the brain, whose levels are required for the proper functioning of the body. Decreased levels of serotonin cause depression and interestingly premature ejaculation in men. Dapoxetine, an SSRI when administered inhibits the breakdown and reuptake of serotonin by binding to the receptors which reabsorb serotonin and reduce their levels in the brain. Due to this, levels of serotonin in body increases and it binds to its receptors called 5-HT receptors. This increased binding of serotonin to its receptors causes delayed Ejaculation in men. Dapoxetine takes 1.01 hrs and 1.27 hrs to show its maximum effect resp. with the doses of 30mg and 60mg. With high-fat meals, the time taken to achieve maximum effect increases to 1.83 hours.

Note: Dapoxetine received a ‘not-approvable’ letter from USFDA and is not approved to be sold in the USA and still is in phase 3 clinical trials. It has been approved in Sweden, Finland, Austria, Portugal, Germany, Italy, Spain, Mexico, South Korea and New Zealand in 2009/2010. It is approved in Australia but is yet to be launched.

The onset of action: The effect of the medicine can be observed within 1-3 hours of administration.
Duration of action: Medicine exerts its effect for 1-2 hours.

Premature ejaculation – It is a common male sexual problem which means a man achieves climax sooner than he likes. In layman language it is described as ‘coming too quickly’. It can either be physiological or biological. It can be primary which means a person has had this problem since the beginning or it can be secondary which means the condition was developed in the later stage of life and the person used to have satisfying sex without premature ejaculation. Although it is not approved for the use in the USA but still is being used illegally there.
Antidepressant – As it belongs to the family of Selective serotonin reuptake inhibitors, which are the drug of choice for depression, so Dapoxetine is also used as an anti-depressant.

First of all, as it is not approved in the USA, so consuming or buying this drug in the USA is illegal. In other countries where it is approved, it is a prescription drug which means it cannot be sold with a genuine prescription from the doctor. Self-medication should be avoided at any cost and one should follow the instructions mentioned in the prescription for safe and effective results. For best results, it is taken 1 hour before anticipated sex. It is taken with a large glass of water, with or without food. For best results avoid taking large meals with the medicine as it increases the time taken by the drug to achieve its maximum effect.

In case of missed dose: As the medication is taken on as and when required basis, i.e 1 hour before sexual activity, so it is less likely to miss a dose of Duratia, but if missed then do not increase the dose next time.

In case of overdose: Overdose may lead to severe side effects mentioned above. If any of these symptoms arise than quickly call or visit your doctor.

Drugs which are known to interact

Apart from the above-mentioned drugs consumption of alcohol must be avoided with the use of Duratia because it may cause increased dizziness.

Duratia tablets must be stored below 360C.

Can women use this medicine?

Ans. No, this medicine is not recommended for use in women.

How much time this medicine takes to show its effect?

Ans. It takes 1-3 hours for this medicine to show its effect

Can I buy this medicine without a prescription?

Ans. No, you cannot buy this medicine without prescription and also it is not recommended to do so for your own safety. 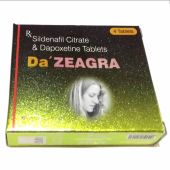