Be the first to review this product
As low as $63.02
In stock
Only %1 left
SKU
GRM272
Duratia 90 Mg contains an active ingredient Depoxetine, safe and effective for the treatment of premature ejaculation, Buy now from our online pharmacy.
Skip to the end of the images gallery 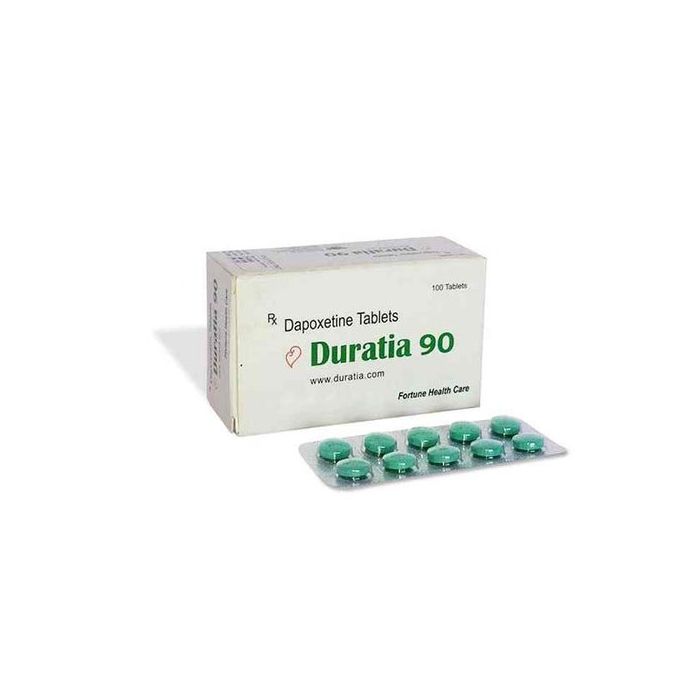 Duratia 90 mg is a brand manufactured by Gujarat based Indian pharmaceutical company Fortune Healthcare India Limited. They are available in the form of oral pills or tablets. Duratia is used to treat the problem of premature ejaculation in males. Premature ejaculation is the condition when men experiences orgasm and expulsion of semen within a shorter duration of intercourse and with minimal penile stimulation. It is phenomena of uncontrolled ejaculation that may happen before, during, or shortly after penetration, despite minimal stimulation. It prevents men from experiencing a satisfying sexual intercourse.

The Active Pharmaceutical Ingredient in Duratia is Dapoxetine. Dapoxetine is a salt having therapeutic properties. Duratia tablet contains 90 mg of Dapoxetine. Duratia is available in various strength 30mg, 60mg and 90mg. The drug is easily available in all the medical stores, drug and chemist stores. It can also be purchased online on various e-pharmacies.

The brand available in the USA market which is equivalent to Duratia (Dapoxetine):

Dapoxetine is a selective serotonin reuptake inhibitor abbreviated as SSRI. It helps in blocking the reuptake of serotonin from 5-HT receptors and thus modifies the reflex which controls the process of ejaculation in males. Dapoxetine is used to treat various conditions like:

Duratia is used for the treatment of the following medical conditions:

Duratia must be taken only after consultation with a registered medical practitioner. The instructions that are given by the doctor must be followed. While taking the drug some instructions should be kept in mind like:

Drug interactions are very common when two or more drugs are taken together. Some potent drugs that can cause interaction with are Duratia –

Duratia (Dapoxetine) should be avoided in patients who have mild to moderate kidney impairment, liver disorders, history of low blood pressure, epilepsy, history of bleeding disorder and clotting problems, erectile dysfunction and people who are suffering dehydration due to vomiting, sweating or other reasons.

While taking Duratia, consumption of certain things should be avoided like

Can Duratia be taken daily?

Ans. NO, do not take Duratia more than once in 24 hours. This drug is based on need as it is taken when a person desires of having sexual intercourse

Does the use of Duratia results has any effect on libido or sex drive?

Ans. Duratia generally has no significant effect on libido or sex drive but in certain cases it can show decrease in sex drive as a side effect.

When should a person take duratia?

Ans. Duratia is advised to be taken 1 to 3 hours before sexual intercourse.

Can Duratia be bought as an over the counter drug?

Ans. NO, it is a prescription medicine as it is acts as an antidepressant also. Duratia should be taken without the consultation of a physician as it may not be suitable for all the men diagnosed with the problem of erectile dysfunction.

Can Viagra be taken with Duratia?