Be the first to review this product
As low as $52.12
In stock
SKU
GRM270
Skip to the end of the images gallery 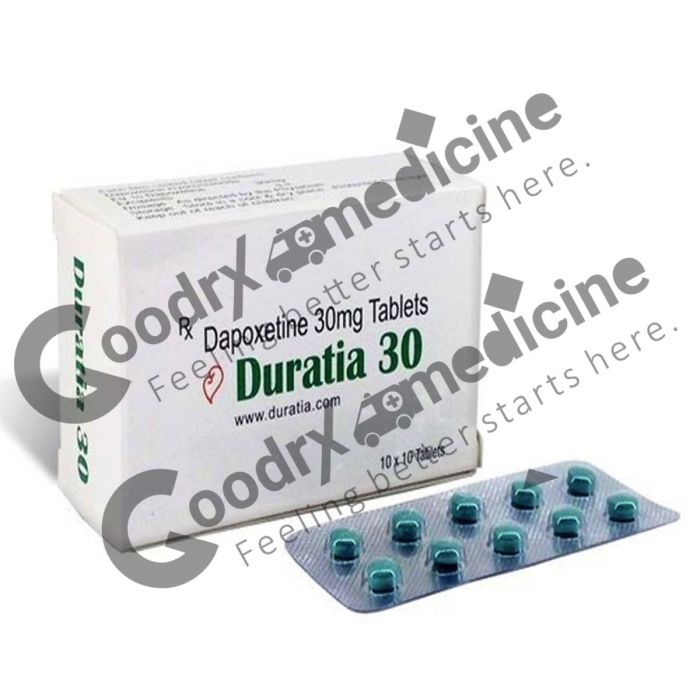 Duratia is a medicine manufactured by Fortune Healthcare, India. It contains principle ingredient as Dapoxetine, along with other excipients. It is used to treating the condition known as Premature Ejaculation. It is the first drug developed to treat the condition known as premature ejaculation in the men having the age between 18-60 yrs old. Duratia (Dapoxetine) drug is referred to class of medication known as SSRIs (Selective serotonin reuptake inhibitor).

Duratia (Priligy) is the first medicine developed to treat the condition known as Premature Ejaculation in men. It contains principle ingredient as Dapoxetine which belongs to class of medication known as fast acting SSRIs (Selective serotonin reuptake inhibitor). Different dosages of Dapoxetine has different effects on Premature Ejaculation. Dapoxetine is given 1-3 hours before sexual intercourse. It prolongs the IELT (Intravaginal Ejaculation Latency Time) as well as increases the sense of control in men. It also increases the the sexual satisfaction in the men of age 18-60 yrs. As the Premature Ejaculation condition is associated with other diseases like personal distress and interrelationship difficulties, it provides help for men to overcome these conditions. As it is a fast acting Selective serotonin reuptake inhibitor, it gets more rapidly absorbed into the body and maximum amount is eliminated from the body within a few hours.

Substitutes of Duratia available in the USA market are:

As the Duratia consist of dapoxetine as active ingredient which is a fast acting class of medicine it doesn’t consist of any severe side effects. As the Dapoxetine easily gets absorbed and easily and rapidly eliminated it don’t cause any severe damage to vital organs like liver, heart, kidney, etc. hence, it shows only minor and general side effects.

Duratia side effects are as follows;

Duratia consisting active ingredient Dapoxetine is very helpful in treatment of Premature Ejaculation. The prescription should always be taken with medical professional’s advice.

Duratia should be avoided during the use of following drugs;

No drugs should be taken without the guidance of medical supervisor. Make sure to check your sensitivity towards drug to confirm your allergies for the drug.

Do not take the drug if;

Duratia as it is a Fast acting class of drugs, it is very safest and efficient medicine. It is compatible with many compounds. Just fewer things to avoid before use of Duratia are;

Precautions to be taken for Duratia (Priligy):

Advice and instructions from Medical supervisors should be taken

Does women too can use Duratia?

Ans. No, Women are not recommended to consume Duratia

How long will it takes to show the effects?

Ans. After consumption of tablet it takes 1-3 hours maximum to show its effects

What if I missed the dose?

Ans. For Duratia, the dose regime is not fixed and hence there will be no chance of occuring Is highly unlikely.

What if I overdose?

Ans. Keep calm, do not panic. Contact your doctor immediately and seek the medical emergency as soon as possible.