Be the first to review this product
As low as $4.24
In stock
Only %1 left
SKU
GRM138
Banocide Forte 100 mg contains active ingredient, Diethylcarbamazine, used to treat Parasitic Worm Infection and Filariasis. Get it from online pharmacy.
Skip to the end of the images gallery 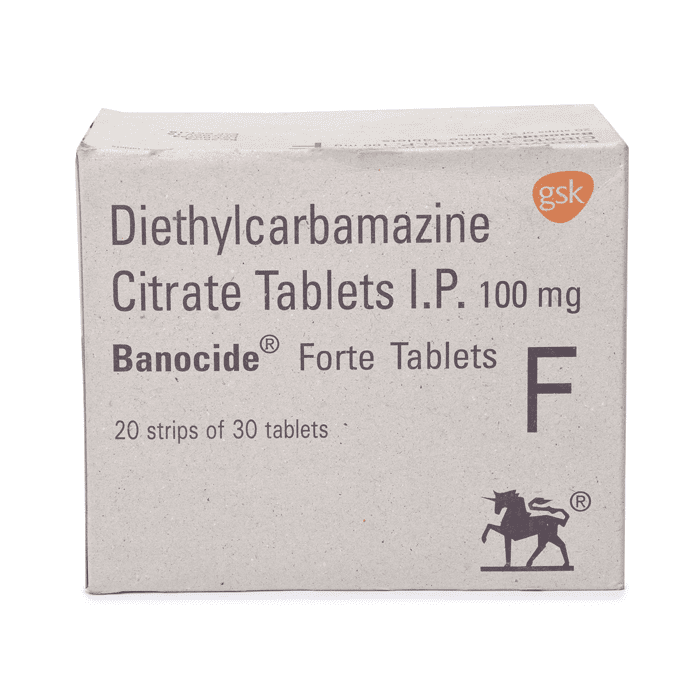 Banocide Forte 100mg is a drug used to treat different kinds of worm infestations in humans. It is one of the most prescribed drugs worldwide where international organisations are trying very hard to wipe out diseases like filariasis. The active component is diethylcarbamazine. Banocide Forte 100mg is now being manufactured in India by GlaxoSmithKline. In the USA also, this medicine is being marketed and sold under the same brand name.

Banocide Forte 100mg is a very effective anthelmintic agent. It is used to treat many worm infestations including filariasis, loiasis etc. Some infections of the eye caused by worms resulting in blindness can also be cured using Banocide forte. However, the diseases caused by pinworms and tapeworms are not controlled by Banocide forte. Diethylcarbamazine is the element responsible for the anthelmintic activity. Phagocytosis (cell eating) of the filarial worms occur resulting in their death.
The drug is available as a tablet and syrup in different doses like 50mg, 100mg and 120mg. Banocide Forte 100mg comes as 30 uncoated tablets per strip. Some other brands of Diethylcarbamazine available in the market are:

About salt of the drug:

Diethylcarbamazine is the molecule present in Banocide forte. It exists in the citrate form. It has been categorised as a small molecule systemic antihelminthic. The salt is acidic in nature and has a cyclic structure. Diethylcarbamazine inhibits enzymes like cholinesterase and lipoxygenase in the worms that has affected the body. It also causes their phagocytosis. The drug is highly specific for certain worms and does not have any effect against pinworms and tapeworms. It does not contain any metallic elements.

Banocide Forte 100mg is one such medication that has found popularity at an international level due to its efficacy against some of the deadliest worm infestations. Many government and non- government organisations use it for treating an array of diseases.
• Bancroft’s filariasis- a condition where worm infestation causes swelling of the legs, arms, genitals etc
• River blindness- a parasitic infestation causing damage in the eyes and skin
• Loiasis- nematode infection affecting the skin and eyes
• Eosinophilic lung- an inflammatory condition of the lung
• Toxocariasis- infection causing cyst formation in the eyes

The pharmacological activity of Banocide forte is attributed to the presence of Diethylcarbamazine. This molecule acts in different ways on different worms. In intrauterine microfilariae, it inhibits the rate of embryogenesis. In general, it sensitizes the microfilariae to phagocytosis. This takes place by alteration of the surface membrane of microfilariae and enhancing the chances of annihilation by the immune system (of the host). The drug also affects the muscles and decreases their activity. This way the filariae is immobilised, facilitating the phagocytic action of the immune system.

There are a few side effects which are very evident during the treatment period.
• Fever
• Chills
• Tiredness
• Localised oedema- like swollen glands in the neck region
• Rashes
• Nausea
• Vomiting
• Vertigo- loss of balance
• Seizures- in those with a history of epileptic conditions
• Myalgia (pain in the muscles) and arthralgia (pain in the joints)
• Rashes in a different area
• Abdominal pain
• Anorexia- abnormally low body weight

Banocide forte must be used carefully exactly as per the instructions of a physician. The correct dosage regimen is important for achieving its full efficacy. The duration of treatment varies in different disease conditions.

Some general instructions are:

• Do not chew or break the tablets in mouth.
• Drink plenty of water while taking this medication.
• Do not discontinue taking Banocide forte as it can affect the efficacy of the drug

Drugs that are known to relate with this medicine:

When to avoid taking this drug:

Banocide Forte is contraindicated in the following cases:

• Hypersensitivity- the drug is to be avoided in case of an excessive allergic response to Diethylcarbamazine or any other ingredients present in Banocide forte
• When there is very severe eye damage during the course of onchocerciasis (a parasitic disease affecting the eyes and skin)
• This medication contains lactose. Those with lactose intolerance and related problems are advised against consuming Banocide forte
• Those having epileptic symptoms are advised not to take this medication. Dose adjustment is done under such circumstances.
• Banocide Forte is contraindicated in patients with cardiac conditions

Things to avoid while taking this drug:

• Banocide Forte 100mg is an antihelminthic medication that has to be used only under medical supervision
• There are chances of develop side effects like nausea, vomiting and drowsiness; do not discontinue the medicine. Inform your doctor.
• The period of treatment (like 14 or 21 days etc.) must be completed. Do not skip doses as it will hamper the efficacy.
• This drug is not useful against pinworms and tapeworms
• Banocide forte is to be taken orally after meals
• An adequate amount of water is to be consumed when one is under treatment with Banocide forte (to prevent extreme acidification of urine).

Be aware of the below-mentioned precautions to prevent unnecessary reactions:

• Pregnancy- Banocide forte is not to be used during any stages of pregnancy. The foetus is severely affected by this medication. It is recommended that she starts treatment after parturition (giving birth).
• Lactation- there are no proper records showing secretion of the active drug molecule into the breast milk. However, the nursing mother should not take this medication or is recommended not to breastfeed while under treatment
• Driving and operating heavy machinery- drowsiness is a very common side effect of Banocide forte. Hence, driving and operating heavy machinery must be avoided.
• Alcohol- any interaction with alcohol is not known. Nonetheless, avoid alcohol consumption so that the side effects are not enhanced.

Some simple storage instructions for Banocide forte are mentioned below:

• Since the strip contains 30 tablets, there are chances of entry of moisture when kept for such long durations. Keep the strip closely packed.
• Direct sunlight should not be allowed to fall on the tablets for prolonged periods.
• Do not keep Banocide forte near areas receiving direct heat.
• The ideal condition to store is room temperature (between 18 to 30 degree Celsius)
• It is not mandatory to keep the tablets in the refrigerator unless instructed by the doctor or pharmacist

What are the commonly seen side effects of Banocide forte that one must be aware of?

Ans. Nausea, vomiting, drowsiness, abdominal pain and fever are some of the frequently observed side effects. Inform your physician if it persists for more than 2 days.

Is this medication habit forming?

Ans. No. Banocide forte does not possess any habit-forming properties

How long should I take this medication?

Ans. The duration of treatment with Banocide forte depends on the type and severity of the worm infestation. It will be decided by your doctor. For example, filariasis requires therapy for 14 continuous days.