Be the first to review this product
As low as $5.33
In stock
SKU
GRM234
Skip to the end of the images gallery 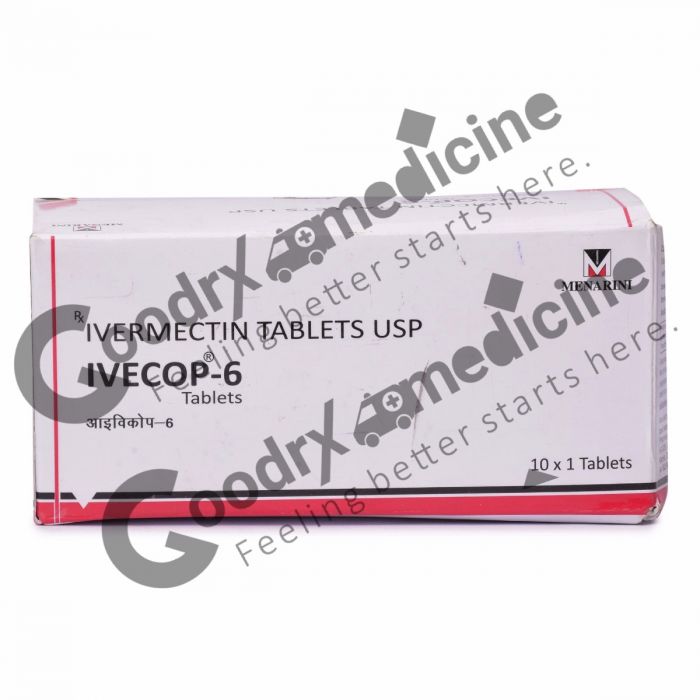 Ivecop 6 mg is an allopathic formulation available in the form of tablets. These tablets are manufactured by the company Tosc International. The major API responsible for its action is Ivermectin. Ivecop 6 mg is an anthelmintic, prescribed for certain parasitic roundworm infection such as Strongyloidiasis and Onchocerciasis. It kills the worms in the intestines.

Ivecop 6 mg contains Ivermectin as the active pharmaceutical ingredient. It is available at online pharmacies, drugstore, and medical stores. The dosage of the tablet is generally determined by the doctor, who decides the dose depending on the age as well as weight of the individual. Ivecop 6 Tablet is an antiparasitic medication. It works by binding the muscle and nerve cells of worms, causing their paralysis and death. It treats your infection.

Ivecop 6 mg is an antibiotic containing Ivermectin which is a member of the anthelminthic family of medicines. Ivermectin belongs to a class of drugs known as anthelmintic. It works by paralyzing and killing parasites. This medication is used to treat certain parasitic roundworm infections. Curing parasitic infections helps to improve your quality of life. In people with weakened defense (immune) systems, curing roundworm infections can reduce the risk of developing a severe or life-threatening infection.

Ivecop 6 mg drug is used for the treatment of the following medical conditions:

Ivecop 6 mg is an anthelmintic drug. Ivermectin binds selectively and with high affinity to glutamate-gated chloride ion channels in invertebrate muscle and nerve cells of the microfilaria. This binding causes an increase in the permeability of the cell membrane to chloride ions and results in hyperpolarization of the cell, leading to paralysis and death of the parasite. Ivermectin also is believed to act as an agonist of the neurotransmitter gamma-amino butyric acid (GABA), thereby disrupting GABA-mediated central nervous system (CNS) neurosynaptic transmission.

Major and minor side effects of Ivecop 6 mg are as follows:-

Tablets are to be swallowed unchewed with fluid. In severe cases or if the patient is unable to take tablets (e.g. patients on enteral nutrition), it is recommended to commence therapy with intravenous ciprofloxacin until a switch to oral administration is possible. The dosage is determined by the indication, the severity and the site of infection, the susceptibility to ciprofloxacin of the causative organism(s), the renal function of the patient and, in children and adolescents the body weight.

Overdose: Discuss with your doctor immediately if an overdose occurs.

Some potent drugs that interact with Ivecop 6 mg are-

What are the most important side effects of Ivecop 6 mg?

Ans. The most common side effects of Ivecop 6 mg include fever, pruritus and skin rashes.

Ans. No such habit forming tendencies were reported with the use of Ivecop 6 mg.

Can alcohol be consumed with Ivecop 6 mg?

Ans. No, alcohol consumption should be avoided since it causes effects such as dizziness, vomiting skin rashes etc.