Be the first to review this product
As low as $1.82
In stock
Only %1 left
SKU
GRM140
Buy Ciplactin 4 Mg and do not lose your confidence. Which is used in the treatment of Allergic Reactions like: Congestion, Inflammation and Itching.
Skip to the end of the images gallery 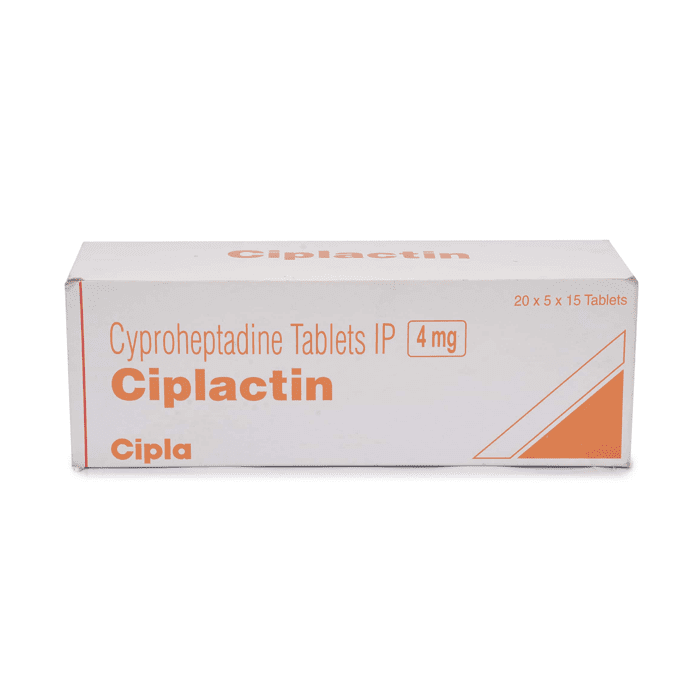 Ciplactin 4 mg (Cyproheptadine) is an antihistaminic agent, manufactured by Cipla, an Indian Pharmaceutical company. It is administered in the form of tebs. It is used to treat allergic rhinitis. It is one of the most effective medicine for the treatment of Allergic Rhinitis, migraine and cluster headache.

The active pharmaceutical ingredient in Ciplactin 4 mg is Cyproheptadine. It is available dosage strengths like 4 mg, 10 mg and 20 mg. It is easily available at all leading pharmacies, online pharmacies, drug stores. The prescription is to be shown before purchasing the drugs. It is used in the treatment of Urticaria, runny nose, watery eyes, Migraine and Allergic rhinitis. It is used only in the treatment of allergies but not in the prevention. It is not recommended to use in children less than 2 years of age.

Some other brands equivalent to Ciplactin 4 mg (Cyproheptadine) in the USA are:

Cyproheptadine is the most commonly used antihistaminic agent. It belongs to the piperidine class of antihistamine used in the treatment of allergies. It shows its activity by blocking histamines.in addition to this, it also blocks serotonin receptors. These histamines are responsible for the allergic reaction like itching, cold and sneezing etc. by blocking this histamine Cyproheptadine helps in reducing allergic reactions but it is not responsible for preventing them. It is the first generation antihistamine is long lasting in nature. It shows its antagonistic activity on the H1 receptor. Histamine is generally released from mast cells when these released histamines get attached to histamine receptors on cells cause allergic reactions. Since it is antagonizing serotonin receptors it is used in the treatment of vascular headache and anorexia. It does not stop the release of histamine, instead, it competes with free histamine for binding at histamine receptors.

Ciplactin 4 mg drug is used for the treatment of:

Ciplactin 4 mg contains Cyproheptadine as an active pharmaceutical agent. It is considered as an antihistaminic agent used to prevent histamine function in the body hence, used in the treatment of allergies and allergic rhinitis. It blocks peripheral H1 receptors thereby reducing the levels of histamine in the body. It mainly shows its action on allergies caused in stomach and intestine, blood vessels and airways leading to the lungs. Cyproheptadine competes with free histamine and for binding at H1-receptors. Due to this binding, the action of endogenous histamine is blocked hence bringing relief from allergy brought on by histamine. It also acts as an appetite stimulant because of it showing its activity on serotonin receptors.

The use of Ciplactin 4 mg is generally safe and is having very few side effects, but it may result in some other side effects based on patient acceptance:

If the above side effects persist continuously then the patient must seek medical attention immediately.

Ciplactin 4 mg is a prescription-only drug which is to be administered exactly in the same manner as prescribed by the physician. All the instructions directed by the doctor should be followed. The following instructions should be kept in mind:

• The tablet must be taken as a whole. Do not chew, break or crush it.

• The dosage regimen should be strictly followed regularly.

• It should be taken twice or thrice daily

• As directed by the physician, the dose and duration of the medication should be strictly followed

Drug interactions are very common when two or more drugs are taken together. Some potent drugs that can interact with Ciplactin 4 mg are-

• Avoid concurrent use Ciplactin with Propoxyphene, Sodium oxybate, Topiramate, Zonisamide as they lead to severe side effects

• The medicine must be protected from the reach of children.

• Inform the doctor about your medical history

• Pregnancy- The medication should not be administered to pregnant women as it affects the foetus.

• Driving – It is not safe to consume it before driving or using machines. This is the drug may cause the patient dizzy. Avoid it till you are completely alert.

• Lactation- the medication is avoided during lactation strictly

General FAQs Regarding The Drug

Can the treatment be stopped once the patient feels better?

Ans. No, it is not advised to stop the treatment in between as it may lead disease to come back and may cause very serious complications.

Will it be recommended to take alter the doses of the drug?

Ans. No, It is not suggested to take smaller doses or larger doses or dose for a longer duration of time than prescribed by the doctor, as it may lead to causing more side effects than treating the disease.

Is it a habit-forming drug?

Ans.  No. it is not a habit-forming medication. It is to be taken only on the prescription of the doctor.