Be the first to review this product
As low as $38.58
In stock
Only %1 left
SKU
GRM115
Buy Super P-Force 100 Mg from our low priced online drug store with fast delivery. Get rid from erectile dysfunction. Enjoy the pleasure you love.
Skip to the end of the images gallery 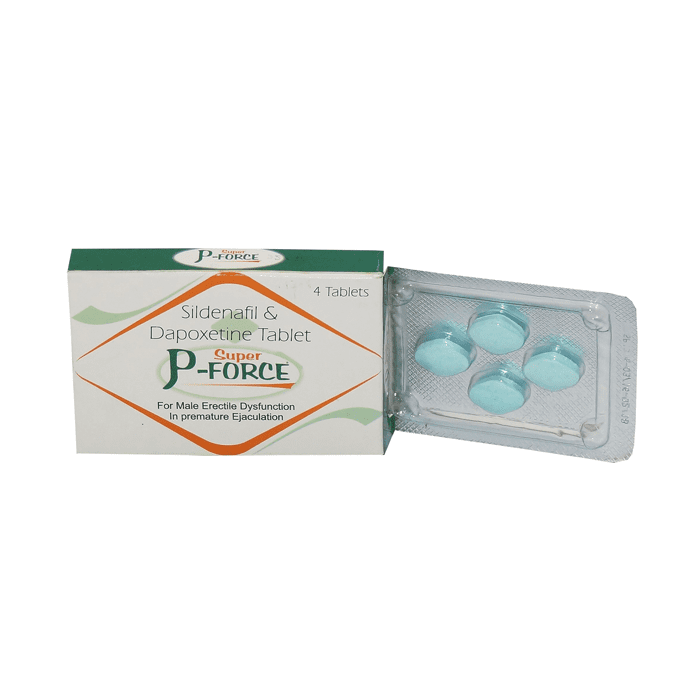 Super P- Force (Sildenafil + Dapoxetine) is manufactured by Sunrise Remedies in India. It is used when men are unable to develop proper erection during sexual intercourse. It helps by providing harder and stronger erections in men and is considered to be one of the safe and most effective drugs used in the treatment of erectile dysfunction. It is also used for premature ejaculation.

Super P- Force is a combination of two drug molecules Sildenafil and Dapoxetine. It contains 100mg of Sildenafil and 60mg of Dapoxetine. This dosage is found to be the most recommended for improving the quality of sexual intercourse. It is commonly used in the tablet form for prolonged treatment. Nowadays Super P-Force jelly is also available in the same dose and other doses like 25mg/50mg/100mg

Though there are no other products with the same strengths companies do manufacture similar products with 50mg Sildenafil and 30mg Dapoxetine combination. Some examples are:

Sildenafil is commonly called Viagra and is used to treat erectile dysfunction in men. It is an FDA approved molecule which is most commonly used to treat ED. It is a phosphodiesterase 5 (PDE5) blocker which basically regulates the flow of blood to different parts of the body. In the penis, it relaxes the blood vessels which results in increased blood flow and helps in achieving a normal penile erection in men.

Dapoxetine is used to treating premature ejaculation in males. It is a selective serotonin reuptake inhibitor whereby it delays ejaculation in men. It is a fast-acting drug and brings about immediate action on the body.

Super P- Force is used to treat the following medical conditions in men:

The advantage of Super P-Force is that it consists of two molecules which help to treat the medical conditions. The ingredients of Super P-Force work in two different ways and hence provides double the effect when compared to other products in the markets.

• Sildenafil is a PDE5 inhibitor whereby it controls the flow of blood to different organs. It relaxes the blood vessels of the penis leading to more blood flow and hence better erection during sexual intercourse. It produces action usually within 20 minutes and normally lasts for about 2 hours.

• Dapoxetine is a selective serotonin reuptake inhibitor; meaning it will help in prolonging the ejaculation time. It takes about 1 hour to produce its effects.

• The combination of the above two molecules will provide an effect of up to 8 hours.

Super P-Force is comparatively well tolerated among the patients. However, it might cause some minor side effects like

These are some less frequently occurring effects and will go off by themselves. However, it should be informed to the doctor if these symptoms persist.

Drugs that are similar to interact with this medicine

Since Super P-Force contains two drug molecules, precautions must be taken while consuming other potent drugs. Always have a proper consultation with your GP regarding your existing medical conditions before you begin your treatment. Do not use this medicine with the following:

• Other products containing similar molecules (such as tadalafil, Vardenafil)

• If you affected by allergy to any of the components

• When under treatment for heart conditions

• Having a history of kidney disorders

• You might get a little dizzy after the consumption of the drug so avoid to drive or use heavy machinery.

• If you are using marijuana, consult with your doctor since it can accentuate the dizziness

There are some common points to remember while taking Super P-Force:

• Start the medication only after consultation with an RMP

• Keep the drug safely away from children and pets

• Store at room temperature away from direct light and moisture

• This medication is not indicated for use by women

• Do not take an extra dose of the drug even when you feel that the effects are not showing. Consult your GP.

• In case of overdose symptoms like fainting and prolonged/ painful erection, get medical help immediately

• Fatty meals should not be taken during the course

• While taking Super P-Force since it may lead to dizziness so avoid to drive or use heavy machinery.

Store the drug at room temperature ideally between 18°C and 21°C. it should be kept away from direct sunlight and moisture. Keep it away from the reach out of children and pets.

What are the symptoms of overdose for Super P-Force?

Will we get an erection even if we do not take part in intercourse?

Ans. No. The components in Super P-Force will provide a penile erection only during sexual intercourse.

Is this drug addictive in nature?

Ans. No. Super P-Force is not addictive in nature and does not cause withdrawal symptoms.

Can this medication be used by men of all ages?

Ans. Usually, this drug is prescribed for men aged 18 to 64 years of age. Caution should be taken otherwise.

Can this drug be used to treat infertility and to increase libido?

Ans. No. Super P-Force does not treat infertility or increase libido in men.

How long will the effects of this drug last?

Ans. It is commonly seen that men achieve proper erections after about 1.5 hours after taking the drug. It may prolong up to 3 hours.