Be the first to review this product
As low as $9.39
In stock
Only %1 left
SKU
GRM240
Availability: IN STOCK Salt Name: Atorvastatin
Manufacturer: Cipla, India SKU: GRM240
Buy Lipvas 40 Mg now from our super fast delivery, online medicine shop . Use it to treat high levels of cholesterol in the blood stream.
Skip to the end of the images gallery 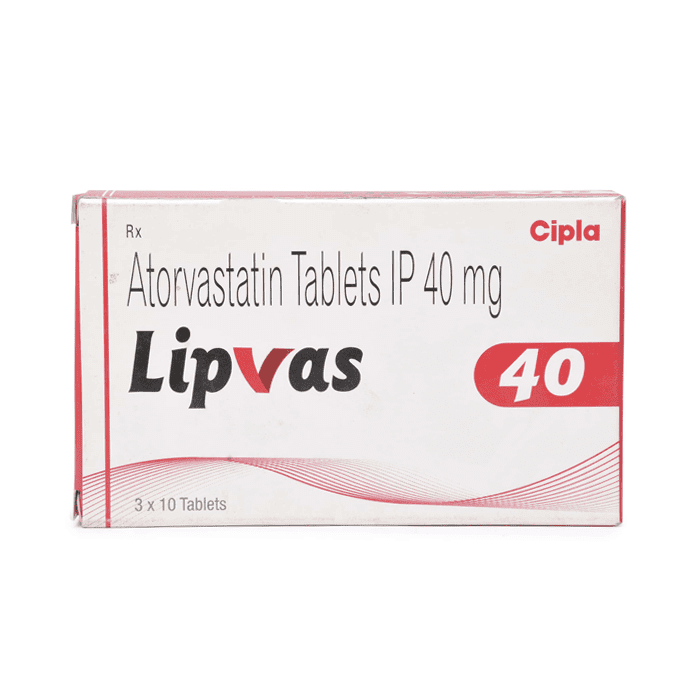 Skip to the beginning of the images gallery

Lipvas 40 is a pharmaceutical formulation available in the form of tablets. It is manufactured by Cipla Ltd. Lipvas 40 is a lipid-lowering medication and is used to treat high cholesterol. This medicine helps by lowering "bad" cholesterol (LDL) and triglycerides (main components of body fat in humans and other animals) as well as raising "good" cholesterol (HDL) at the same time. The benefit of lowering cholesterol levels is that it reduces the risk of heart attack and stroke. The drug may be used alone or in combination with other medicines.

Lipvas 10 mg Tablet belongs to the “statin” group of drugs. It is a prescribed drug that contains atorvastatin as its active pharmaceutical ingredient which reduces the levels of bad cholesterol and triglycerides in the blood. Lipvas is dose strengths of this drug are available i.e. 10 mg and 20 mg and are recommended as per the condition of the patient. Changes in lifestyle such as low-fat diet, regular exercise and smoking cessation may help this medicine to work better. Substitutes for Lipvas 40 mg are Atorlip 40 MG, Atormac 40 mg, etc.

Atorvastatin is a statin medication used to prevent cardiovascular disease in individuals who are at high risk and treat abnormal lipid levels and this drug is sold under the brand name Lipvas 40. Statins are a first-line treatment for the prevention of cardiovascular disease. Atorvastatin acts as an inhibitor of HMG-CoA reductase, an enzyme found in the liver which plays an important role in producing cholesterol.

Lipvas 40 mg Tablet is used to decrease the abnormally high levels of lipids in the blood.

Lipvas 40 MG Tablet is used to diminish high levels of LDL cholesterol and triglycerides in the blood and increases the levels of high-density cholesterol.

It is used in the lowering of triglycerides in the blood.

It is used in the prevention of stroke and heart attack in patients at risk due to conditions like diabetes, hypertension, coronary heart disease, etc. It can also be used for individuals exposed to multiple risk factors like smoking, age, family history of occurrence, etc.

Side effects of Lipvas 40 mg

Lipvas 40 mg is associated with several side effects:

Consult your physician as soon as you recognize any of these side effects.

How to use this drug

Lipvas 40 mg is known to show drug interactions with many drugs that can alter the effect of the drug when taken simultaneously and also can cause unwanted side effects. Some of these drugs that show severe side effects with Lipvas 50 mg are listed as follows:

When not to use it?

Lipvas 40 MG Tablet should not be suggested to patients who have allergy to this medicine.

Certain things to be avoided while using Lipvas 40 mg tablet are:

What is the Onset of action of Lipvas 40 mg?

Ans.  The effect of Lipvas 50 mg can be observed within 3 to 5 days of administration.

Can you stop using statins once you started?

Ans. Statins are usually very successful at lowering cholesterol levels, but they only work as long as you're using these drugs. Therefore, most people who begin taking a statin medicine will probably take it for the rest of their lives.

Is Lipvas 40 mg Safe with alcohol?

Ans. Interaction with alcohol is not known yet. It is worthwhile to consult your doctor before consumption.

Is it habit forming?

Ans. No habit-forming tendencies of Lipvas were reported.

Can this drug be used in pregnancy?

Ans. Lipvas 40 mg is not recommended for use in women who are or may become pregnant.

Ans. Lipvas 40 mg is not recommended for use in women who are breastfeeding due to a risk of severe adverse effects on the infant.

Reviews
Write Your Own Review