Be the first to review this product
As low as $7.58
In stock
Only %1 left
SKU
GRM239
Lipvas 20 mg has an active ingredient, Atorvastatin is a cholesterol-lowering agent. Buy now from our online drug store with fast delivery
Skip to the end of the images gallery 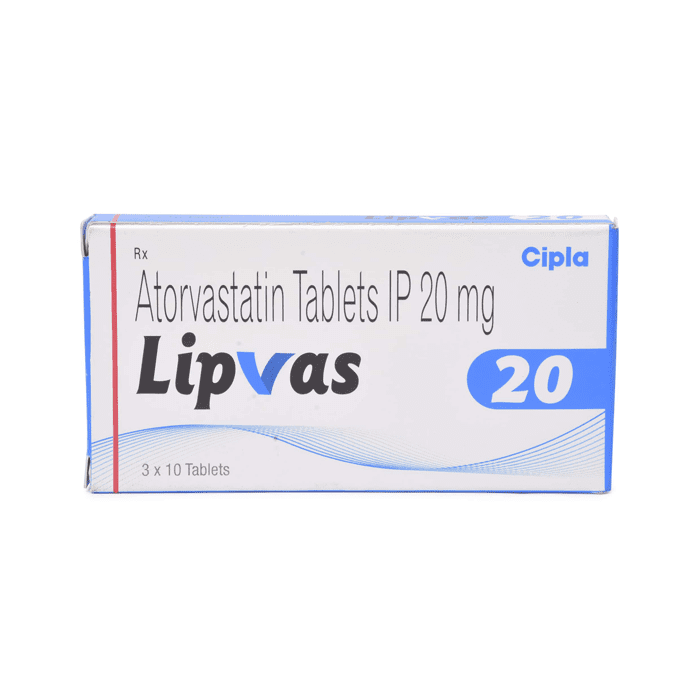 Lipvas 20 mg (Atorvastatin) is an antihyperlipidemic drug formulation in the form of a tablet. It is manufactured by India based Cipla Ltd. whose headquarter is located in Mumbai, Maharashtra. The active pharmaceutical ingredient which is responsible for the antihyperlipidemic action is Atorvastatin. Atorvastatin belongs to the class of Statins which are used to treat conditions relating to increased cholesterol levels in the body and other heart conditions.

Some other brands equivalent to Lipvas 20 mg are:

Lipvas 20 mg contains an antihyperlipidemic Atorvastatin in the salt of Atorvastatin Calcium. Atorvastatin calcium inhibits the enzyme HMG-CoA reductase which is responsible for the production of cholesterol and thus helps in reducing the high LDL, triglycerides and bad cholesterol levels in the body. It is also found to be used in long term cardiovascular complications like heart attack, stroke, chest pain, etc. It can be taken single or in combination with other drugs depending upon the indication and its severity.

Lipvas 20 mg is used in the treatment of various diseases and disorders which are caused due to high cholesterol and lipid levels in the body. Being an HMG Co-A reductase inhibitor, it is capable of reducing the levels of Low-density lipoprotein (LDL) and Triglycerides. In addition, it also increases the amount of High-density lipoprotein (HDL) in the body as well. Thus, it is helpful in the treatment of primary hypercholesterolemia, hypertriglyceridemia, mixed dyslipidemia, and for the prevention of various cardiovascular diseases like heart attack and stroke.

The use of Lipvas 20 mg may be associated with some side effects which are listed below.

Some severe side effects of Lipvas 20 mg are:

Some other known side effects of Lipvas 20 are as follows:

Promptly consult your health professional i.e. pharmacist or doctor, if you experience any of the side effects lasting longer than usual.

Lipvas 20 mg should be used only when prescribed by the doctor and never otherwise. One must know the following instructions of how to use Lipvas 20 mg:

Lipvas 20 mg is known to interact with many drugs and formulations which when taken along with Lipvas 20 mg can alter the effect of either or both the medications. Some of the drugs with which Lipvas 20 mg shows drug interactions are as follows:

Discuss with your doctor about all the current medications you take, to avoid consequences due to drug interaction.

Lipvas 20 mg should be used only when it is prescribed by the doctor and should be avoided in certain conditions which are as follows:

Certain things to be avoided while using Lipvas 20 mg are as follows:

Lipvas 20 mg is a schedule H drug and should be taken as instructed by the doctor.

How should I use this medication?

Can I take a double dose for better effect?

Can this drug be used in pregnancy?

Ans. Lipvas 20 mg is not recommended for use in pregnancy. It should be used in pregnant women or women who are planning to raise a family.