Be the first to review this product
As low as $50.50
In stock
Only %1 left
SKU
GRM214
Buy Dapsone 100 Mg with super fast and safe delivery services from our online medicine shop . It is used in the treatment of Leprosy.
Skip to the end of the images gallery 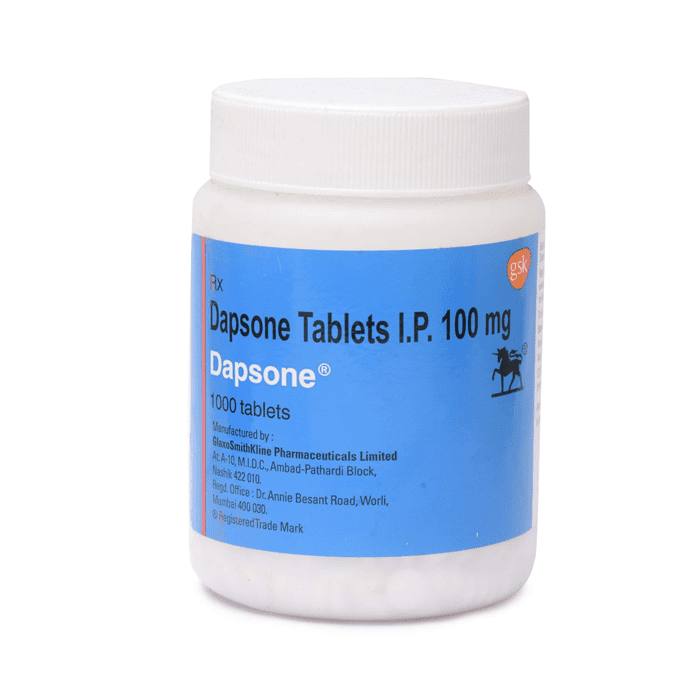 Dapsone 100 mg is an allopathic formulation available in the form of tablets. These tablets are manufactured by the company GlaxoSmithKline (GSK). The major API responsible for its action is Dapsone. Dapsone 100 mg is an antibacterial drug which used along with other drugs in the treatment of leprosy, a long-term infection caused by Mycobacterium leprae or Mycobacterium lepromatosis. This infection is identified by the loss of parts of extremities due to repeated injuries or unnoticed wounds.

Dapsone 100 mg contains Dapsone as the active pharmaceutical ingredient. It is available at online pharmacies, drugstore, and medical stores. The dosage of the tablet is generally determined by the doctor, who decides the dose depending on the age as well as weight of the individual. It is available in different strengths of 25mg and 100 mg. Dapsone 100 mg Tablet works by blocking the production of certain components necessary for the bacteria to divide and increase in numbers.

Dapsone 100 mg is an antibiotic containing Dapsone which is a member of the Sulphone family of medicines. This medication is used to treating a certain type of skin disorder (dermatitis herpetiformis). It is also work with other drugs to treat Hansen's disease. Dapsone belongs to a class of drugs which known as sulfones. It acts by decreasing swelling (inflammation) and stopping the growth of bacteria. This drug will not work for viral infections (e.g., common cold, flu).

Dapsone 100 mg drug is used for the treatment of the following medical conditions:

Dapsone 100 mg is an antibiotic. Dapsone acts against bacteria and protozoa in the same way as sulphonamides, that is by inhibiting the synthesis of dihydrofolic acid through competition with para-amino-benzoate for the active site of dihydropteroate synthetase. The anti-inflammatory action of the drug is irrelevent to its antibacterial action and is still not fully understood.

Major and minor side effects of Dapsone 100 mg are as follows: -

Tablets are to be swallowed unchewed with fluid. The dosage should be determined by the indication, the severity and the site of infection, the susceptibility to Dapsone of the causative organism(s), the renal function of the patient and, in children and adolescents the body weight.

Overdose: Contact your doctor immediately if an overdose occurs.

Some potent drugs that interact with Dapsone 100 mg are-

Is Dapsone 100 mg safe to be taken in pregnancy?

Ans. Dapsone 100mg tablet can be unsafe to use during pregnancy.

Animal studies have shown adverse response on the fetus, however, there are limited human studies. Pregnant women may be acceptable despite the risk while using this tablet.

Ans. No such habit-forming tendencies were reported with the use of Dapsone 100 mg.

Should Dapsone 100 mg be consumed with food or without food?

Ans. Dapsone 100 mg should be taken with meals only.