Be the first to review this product
As low as $14.54
In stock
Only %1 left
SKU
GRM316
Through away the problem of Type 2 Diabetes Mellitus with Bigomet 500 Mg. Buy now from our online medicine shop with super fast delivery service
Skip to the end of the images gallery 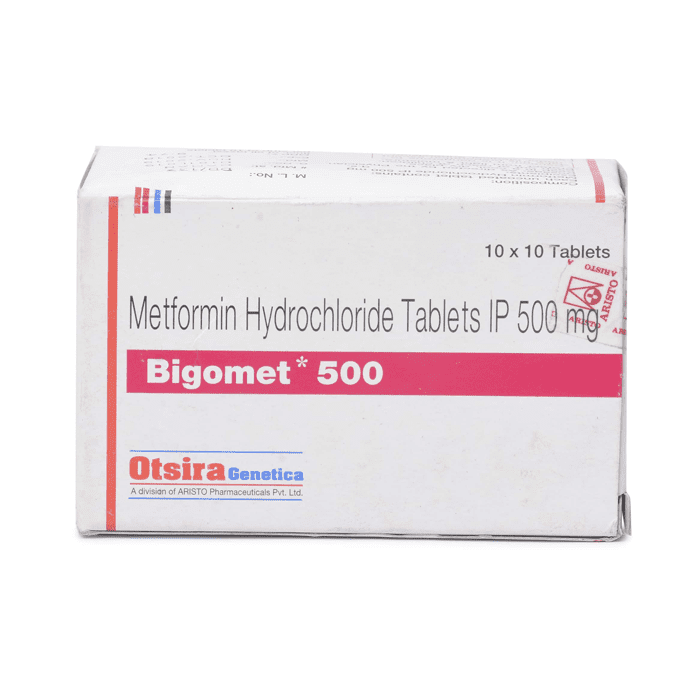 Bigomet 500 mg is an anti-diabetic medicine.

Metformin, the active ingredient in Bigomet 500 reduces the liver's ability to produce glucose by delaying the absorption of glucose from the intestines.

Bigomet 500 mg is a prescription-based medicine.

The pill should not be consumed in an empty stomach. It might cause nausea and abdominal ache.

This pill should be taken consistently at the same time and duration for effective results.

Even if you miss a dose, abstain from taking a double dose simultaneously.

Some of the common side effects of Bigomet 500 mg are as follows:

Bigomet 500 mg can react with other drugs and produce harsh effects. These drugs are as follows:

It is advisable to seek your doctor’s suggestions before consuming Bigomet 500 mg, if you are suffering from any of the following disease:

It is recommended that you avoid alcohol alongside consuming Bigomet 500 mg tablets.

Keep it away from pets and children.

Bigomet 50 mg should be stored in a cool and dry space.

In those who are obese or overweight, and at risk for diabetes, it can also result in a little weight loss.

Patients who are insulin sensitive or resistant may also experience weight loss.

However, you shouldn't begin using this medication for weight loss on your own.

Can a Bigomet 500 mg Tablet make you sleepy?

Bigomet 500 Tablet does not make people feel tired or sleepy.

However, rarely, Bigomet 500 may result in insomnia and other sleep-related problems.

Consult your doctor if you experience fatigue or sleepiness while using Bigomet 500 Tablet.

What are the benefits of taking a Bigomet 500 Tablet?

It lessens the quantity of glucose the liver produces and the amount the intestines absorb.