Rating:
100 % of 100
1  Review Add Your Review
As low as $18.79
In stock
Only %1 left
SKU
GRM265
Availability: IN STOCK Salt Name: Minocycline Hydrochloride
Manufacturer: Sun Pharmaceutical, India SKU: GRM265
Minoz 100 is Tetracycline based antibiotic to treat bacterial infections in skin acne, respiratory and urinary tract infections. Get now with fast delivery
Skip to the end of the images gallery 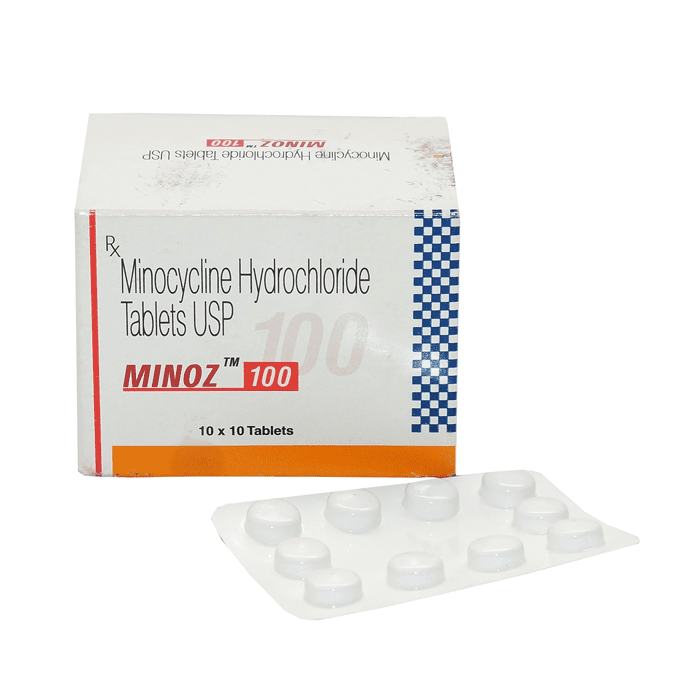 Skip to the beginning of the images gallery

Minoz 100 mg (Minocycline) is a medical formulation in the tablet form which is manufactured by India based Sun Pharmaceuticals Ltd. The active ingredient in it, which is responsible for its action is Minocycline Hydrochloride. It is used for the treatment of a variety of bacterial infections. Minoz 100mg falls under the class of Tetracycline antibiotics.

Minoz 100 mg contains Minocycline as its active pharmaceutical ingredient. It is available with the dosage strengths of 50 mg and 100 mg. It can be easily available in online pharmacies, medical shops, or local chemist shops. It is a schedule H drug and hence can only be bought when having a prescription to it. It is a good antibiotic and is used in treating various bacterial infections such as Acne.

Some other brands similar to Minoz 100 mg are

Minocycline is a tetracycline antibiotic medicine which is used to treat infections caused by bacteria. It is a broad spectrum antibiotic that acts against both gram positive and gram negative bacteria and relieves various infections of the lungs, skin and reproductive organs. Minocycline, which is the active ingredient in Minoz 100 mg, is, hence, used for various infections as follows:

Minoz 100 mg is used for the treatment of the following infections:

Acne is the most common skin infection, mostly prevailing in teenagers. It is a condition of the skin in which the hair follicles become filled with oil and dead skin cells and forms whiteheads, blackheads or pimples.

It is an infection where the air sacs in the lungs (one or both) are swollen and may get filled with fluid or pus which causes cough with pus, fever, chills and obstructs breathing. Its seriousness ranges from mild to even life threatening.

Minoz 100 mg (Minocycline) consists of Minocycline which is a broad spectrum tetracycline antibiotic. It acts by accumulating inside the bacterial cell through passive diffusion and then inhibits the bacterial protein synthesis by attaching to the 30 S subunit of the bacterial ribosome. It, hereby, prevents the synthesis of essential proteins which are required for bacterial growth and shows a bacteriostatic action which acts against both, gram positive and gram negative bacteria.

Though the use if Minoz 100 mg is not associated with severe side effects but one can experience some of the following while using Minoz 100 mg:

Some rare side effects of Minoz 100 mg are:

If any of these listed effects last long or worsens, promptly consult to your nearest doctor.

Minoz 100 mg is a Schedule H drug which should be used only when prescribed by a registered medical practitioner. The patient should use the drug as directed by the physician. Some instructions should be kept in mind while using Minoz 100 mg which are as follows:

Drug interactions occur when some other drugs interfere with the existing drug and can manipulate the desired effect of the drug. It can cause severe side effects when two or more drugs are taken together. Minoz 100 mg shows some drugs interactions with the followings:

Minoz 100 mg should be avoided in the conditions as follows:

One should avoid the following when taking Minoz 100 mg:

How should I take this medication?

How many tablets one should take in a day?

Ans. One should take only 1 or 2 tablets of Minoz 100 mg in a day unless your doctor prescribes otherwise.

Is it safe to use Minoz 100 mg in pregnancy?

Ans. It is not recommended to use this medication during pregnancy or during lactation as it can potentially harm the baby.

Reviews 1
Write Your Own Review