Be the first to review this product
As low as $2.42
In stock
Only %1 left
SKU
GRM314
Flagyl 400 Mg is prescribed for thr treatment of infections in the stomach, genital areas which is an antiprotozoal. Shop now with fast delivery
Skip to the end of the images gallery 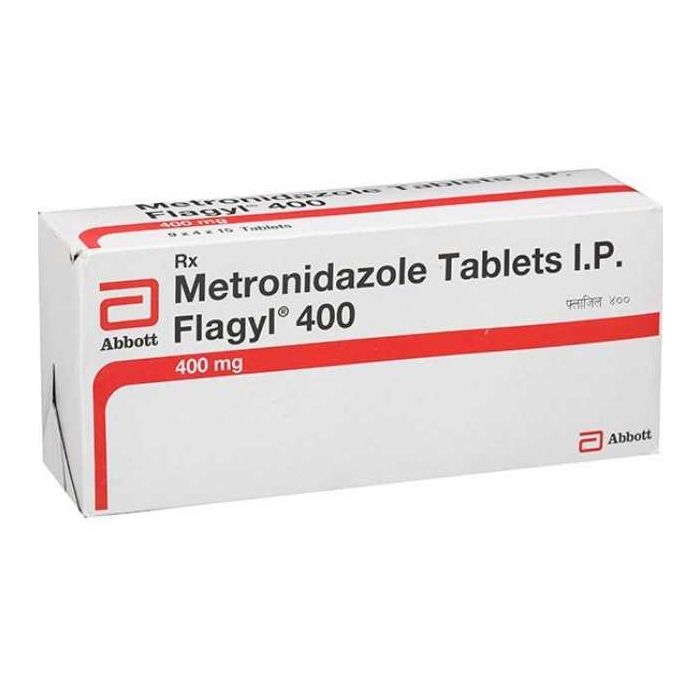 Some another brands equivalent to Flagyl 400 mg tablets (Metronidazole) in the USA are:

Metronidazole is a medicine belongs to Nitroimidazoles class of Antiprotozoal drugs. It is a prodrug which gets reduced into its active form inside the bacteria and it shows its action selectively against anaerobic bacteria (bacteria that cannot survive or grow in presence of oxygen). After its conversion into its active form it gets bind covalently to the bacterial cell DNA and causes disruption of its helical structure leading to inhibition of nucleic acid synthesis and ultimately resulting into death of bacteria. Thus, Metronidazole provides effective treatment against bacterial infections taking place inside the stomach and genital areas.

Flagyl 400 mg tablets (Metronidazole) is widely used in the treatment of bacterial infections taking place inside the stomach and genital areas and their associated symptoms mentioned as below:

Flagyl 400 mg tablets (Metronidazole) contains Metronidazole as its main active pharmaceutical ingredient belongs to Nitroimidazole class of Antiprotozoal drugs. It is a prodrug (A drug which gets converted into its active form biologically inside the body) which gets converted into its active form after reduction and binds covalently to bacterial DNA and causes disruption of its helical structure leading to inhibition of bacterial nucleic acid synthesis and results into bacterial cell death. Thus, Flagyl provides effective relief from various bacterial infections and their associated symptoms into the stomach and genital areas.

Though Flagyl 400 mg tablets (Metronidazole) does not cause any severe side effects if it is administered at a normal dose but sometimes it results into some common side effects mentioned as below:

In case of appearance of any of the above-mentioned symptoms, kindly consult your doctor immediately without any delay.

Flagyl 400 mg tablets is a drug meant to be taken in the same manner as it is prescribed by the doctor and follow all the instructions mentioned as below:

Two or more drugs are taken together simultaneously at the same time results into drug interaction. Drugs which show drug interaction with Flagyl are mentioned as follows:

This drug is not meant to be used in the medical conditions mentioned as follows:

Avoid the use of following things with Flagyl described as follows:

How much duration of time will this medicine take to show its maximum action?

Ans. This medicine will show its maximum action within 1 to 2 hours after its intake.

Can this medicine be taken along with food?

Ans. Yes, this drug can be taken along with or after meals as per directed by the doctor.

Does it a habit-forming drug?

Ans. No, it is not a habit-forming drug and completely safe for use.

Does this drug safe for use in elderly patients?

Ans. Yes, this medicine is completely safe for use in elderly patients at a lower dose than the usual adult dose as per directed by the doctor.