Be the first to review this product
As low as $73.63
In stock
SKU
GRM176
Skip to the end of the images gallery 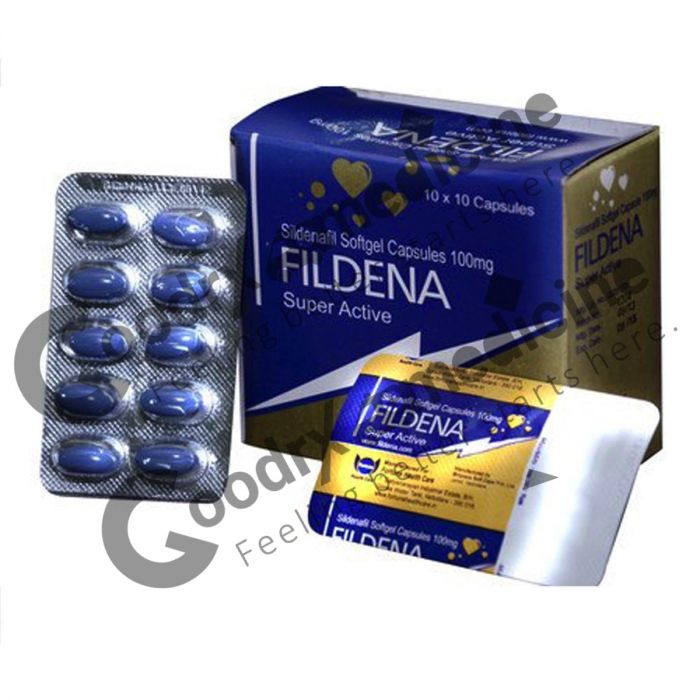 Fildena Super Active is a brand manufactured by Fortune Healthcare Pvt. Ltd. It is a medication used to treat Erectile Dysfunction (ED). Moderate dosage Fildena Super Active serves the best treatment to deal with impotence and enjoy sexual intercourse without any worries of failures. This capsule is one of the high doses ED medicines which help a man achieve and maintain an erection which stays on for a longer period of time. The medication is available in different gel caps form that proves to be the best solutions to overcome penile discrepancies from roots

Fildena Super Active contains Sildenafil citrate as its active pharmaceutical ingredient. It is released in capsule covered with a bluish purple shell. It is the fastest medicine to absorb and longest to stay active version of Sildenafil. This capsule is the newest version of Sildenafil citrate, which represents the fourth generation of PDE5 inhibitors, which is responsible for reducing the flow of blood in a man’s body, thereby allowing erection to occur only after sexual stimulation.

Like all of the PDE5 inhibitors, Sildenafil improves the ability of men with ED to achieve an erection. It improves the erectile response of the penis when a man has been sexually stimulated. The effectiveness of the ED medicine is seen only when the pill is consumed in presence of complete sexual arousal. All adult men can safely take this ED medicine post consult doctor as prescribed by them

Fildena Super Active is used for the following medical conditions:-

Fildena Super Active works by relaxing the smooth muscles present in the walls of blood vessels in the penis. This action is limited to particular areas of the body and the flow of blood in these areas is increased. Thus, only when a man has been sexually stimulated, it increases blood flow in the penis, resulting in a successful penile erection.

When taken for erectile dysfunction, take this medicine at least 30-60 minutes before sexual activity, but no more than 4 hours.

The most common side effects of daily dose Fildena Super Active include:-

There is no fixed dose as to how a tablet has to be taken; the general rule is that one should not take double capsule per day.

In cases of overdose has been reported, standard supportive measures should be used as required. Renal dialysis should not be used to accelerate clearance as sildenafil is not eliminated in the urine.

Drugs that are known to interact with the medicine

The possible drug interactions are known to occur with Fildena Super Active:-

Things to avoid while using the drug

Fildena Super Active will need a proper storage area to avoid losing the efficiency of the drugs. The appropriate room temperature when storing erectile and sexual dysfunction drugs should be between 40 to 85 °F (15 to 30 degrees Celsius). The Fildena Super Active has a higher chance of losing its efficiency if it comes in contact with light, heat, and moisture.

Therefore, it is advised to place the medication in a dark and cool place to protect it from the elements. If the pills are already out of date, dispose of it properly by mincing and throwing it in the trash. This way, no one would accidentally pick and use the still-packed drug. Do not throw the medicine in the drain unless advised to do so by your doctor.

Ans. It does not exactly cure ED but helps a man achieve and maintain erection during a sexual intercourse.

If a patient having BP more than 130mmHg, should he take Fildena for the treatment of ED?

Ans. No, the patient should not consume Fildena for the treatment of ED since consumption of the medication would worsen his high BP.

How long does it take for Fildena to take effect?