Be the first to review this product
As low as $7.38
In stock
Only %1 left
SKU
GRM253
Aziderm Cream 20% (15 gm) reduce the inflammation and swelling in the pores of the skin. Buy it now from our online medicine shop . Quick delivery!
Skip to the end of the images gallery 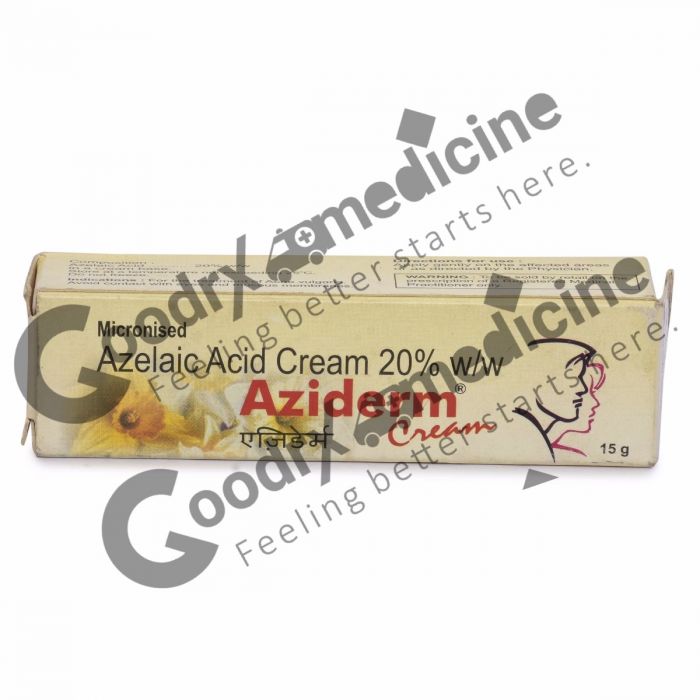 Finacea cream (aziderm cream)is the anti-acne formulation which is used mostly to treat mild to moderate pimples. It is available as 20% w/w cream with a pack size of 15gm This is manufactured by Micro Labs Ltd. The active pharmaceutical ingredient (API) present in the formulation is Azelaic acid.This medicament is used to relieve symptoms related to acne like bumps, lesions, redness. This drug belongs dicarboxylic acid category in antimicrobials and anti-acne category in precise.

Aziderm cream 15% w/w contains Azelaic acid as the active pharmaceutical ingredient. It is available in different-different dosage forms like cream(20% as azelex ), gel(15% as finacea), foam (15% as finacea) and kit (15% as finacea plus). It is an antimicrobial formulation mainly used to relieve symptoms of acne. It is easily available in all the medical stores, retail stores, and online pharmacies. The formulation contains the drug equivalent to 15gm.

Some other brands equivalent to Aziderm 20% cream is

It is available in the form of monosodium salt of dicarboxylic acid. It is used to relieve mild to moderate acne and more precisely the comedonal and inflammatory acne. It acts by decreasing the keratin levels of the body by means of which the occurrence of acne can be minimized as the keratin is responsible for acne to occur.It is also evident that the drug is used to relieve the bumps and lesions caused by rosacea.

Azelaic acid can relieve the symptoms occurs in acne and rosacea conditions like redness, bumps and lesions. It is also used to treat skin pigmentation which includes the melasma and post inflammatory hyperpigmentation in patients who are darker skin types, recommended as an alternative to hydroquinone, being a tyrosine inhibitor it can also act by decreasing the synthesis of melanin. It also relieves the symptoms like black heads, redness, tenderness, bumps on the skin associated with acne vulgaris.

Azelaic acid belongs to monosodium salt of di-carboxylic acid class of antimicrobial. It is saturated dicarboxylic acid which is naturally found in wheat, rye and barley and is also produced by 2 genera of fungi namely Pityrosporum ovale and Malassezia furfur. It is a topical cream which is applied generally over the skin. It works by stopping the growth of skin bacteria that cause acne and it will keep skin pores clear. It's main mechanism of action is mainly attributed to inhibition of microbial cellular protein synthesis. The exact mechanism of action is unknown but it is thought to be as inhibition of hyperactive protease which converts cathelicidin to antimicrobial skin peptide. Being a tyrosine inhibitor it is proven to even reduce the content of melanin in the skin by inhibiting it's synthesis.

Side effects of the drug

The major side effects which are observed while using this cream are redness, itching and burning at the application site, dry skin, tenderness of the skin, stinging sensation at the application site, sudden swelling of eyelids, face, throat and tongue, the other effects like difficulty in swallowing and difficulty in breathing may also occur rarely. The irritation will generally occurs at the initial stage of treatment but as the time proceeds it will get decreased. The side effects like hypopigmentation that is lightening of skin will also occur while using the drug.

If any of the above symptoms bother the patient then it will be advisable that he or she should contact the physician or pharmacist as early as possible so that he can get relieved from the symptoms.

Patients are advised to follow the full course of treatment. Should avoid the contact of cream with the eyes, mouth and other mucus membranes. The cream should be applied in the affected area of skin twice a day both morning and evening, before using the cream the skin should be cleaned with a mild soap or soap free cleanser afterwards wash your face with clean water once it's done start applying the cream in small amounts with clean fingers and rub the ae gently into the skin. The applied skin should not be covered unless recommended by the physician

You can continuously use the cream for several months in required cases and you can repeat the treatment if your acne returns.

The drug may be known to interact with isotrenitoin but the exact clinical data is not available regarding the interactions of the drug.

But the drug interactions may differ from person to person. So, it will be better to check all the interactions that are possible in each of the possible cases.

One should avoid using the drug

The medication should not be freezed

Keep out of the reach of children

Flushing the cream in the toilet should be avoided.

Does Azelaic acid can be used for wrinkles?

Ans. Azelaic acid is generally used to treat acne due to its anti inflammatory properties It can also be used to treat rosacea, it will also help in smoothing and reducing the fine lines and wrinkles as well.

Whether Azelaic acid lighten the skin?

Ans. Azelaic acid is a natural skin brightener which is abundantly found in wheat, rye and barley and is much more effective than the hydroquinone assist has anti inflammatory properties it is effective in the treatment of acne.

Can I apply moisturiser after applying the aziderm cream?

Ans. Finacea is a topical medication that should be applied to the face gently and should be allowed to dry before applying a moisturiser.