Be the first to review this product
As low as $45.81
In stock
SKU
GRM310
Skip to the end of the images gallery 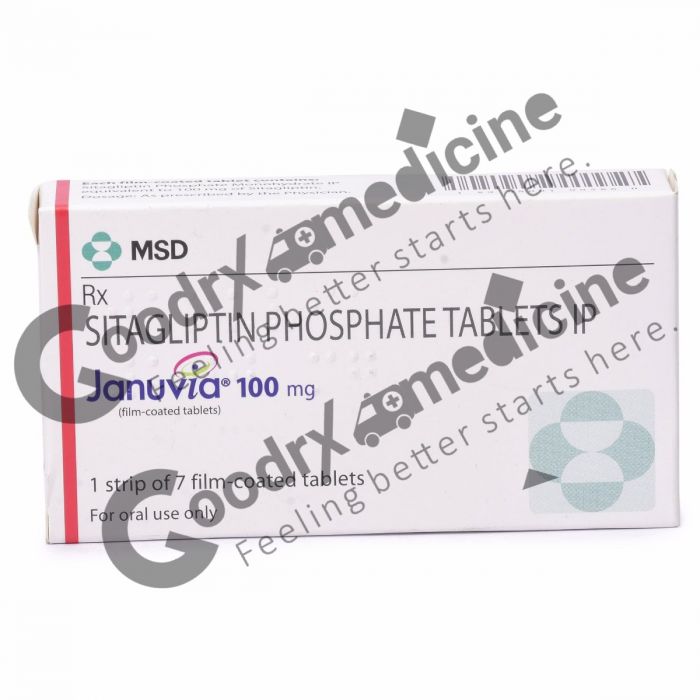 Januvia 100 mg is a brand of medicine manufactured by one of the largest pharmaceutical companies in the world, MSD. MSD is an America based multinational pharmaceutical company with its subsidiaries all over the world. Januvia 100 mg is an allopathic medicine used for the treatment of people suffering from Type 2 diabetes. Type 2 diabetes is the condition when there is high sugar level in the blood, resistance against insulin is developed and relatively low levels of insulin is generated in the body. Januvia 100 mg is a known drug for the treatment of all these symptoms along with a strict diet and exercise regimen.

Sitagliptin is a salt which shows the therapeutic effect to treat type 2 diabetes. It functions by inhibiting the enzyme which is responsible for destroying the Glucose affecting hormones of the blood. Thus the increase concentration of these hormones are increased by Januvia and the action of the hormones is prolonged resulting in stable blood glucose levels. Januvia 100 mg tablet is used for the treatment of following medical conditions :

Januvia 100 mg I used to treat the medical condition of :

Januvia 100 mg is used for the treatment of type 2 Diabetes Mellitus either in monotherapy or combination therapy with other medicine. It acts by reducing the blood glucose levels by inhibiting an enzyme. The enzyme inhibits glucose regulating hormones thus causing imbalance in Glucose levels in the blood. Januvia 100 mg inhibits the enzyme and helps to restore the normal blood glucose levels. It also increases the level of insulin formation from the pancreas and regulates the glucose metabolism for both fasting and postmeal conditions.

The treatment with Januvia 100 mg are related with the manifestation of few side effects. These side effects can differ from person to person depending on the severity of the condition and several other factors. The common side effects observed are :

These are side effects are common and for a shorter duration of time while undergoing treatment with Januvia 100 mg . But if any of these symptoms of side effects prevails for a longer period of time, it is advisable to inform a physician as soon as possible.

Interaction between drugs are common when two or more drugs are taken simultaneously that react with each other. These drug interaction reactions can be harmful. Some drugs that are known to interact with Januvia 100 mg are :

Januvia 100 mg should not be prescribed to people who are suffering from the following conditions like :

consumption of certain food profi and beverages should be avoided while undergoing treatment with Januvia 100 mg like :

How long does Januvia 100 mg takes to show its effect?

Ans. The immediate effect is generally seen after 2 weeks of taking Januvia 100 mg.

Is Januvia 100 mg known to cause gain in weight?

Ans. No, Januvia 100 mg is not known to increase the weight and also a strict diet is maintained along with it to control the body weight