Be the first to review this product
As low as $7.15
In stock
Only %1 left
SKU
GRM252
Aziderm Cream 10% (15 gm) is used to treat mild or moderate acne. Buy now from our online pharmacy . Super fast and safe delivery service.
Skip to the end of the images gallery 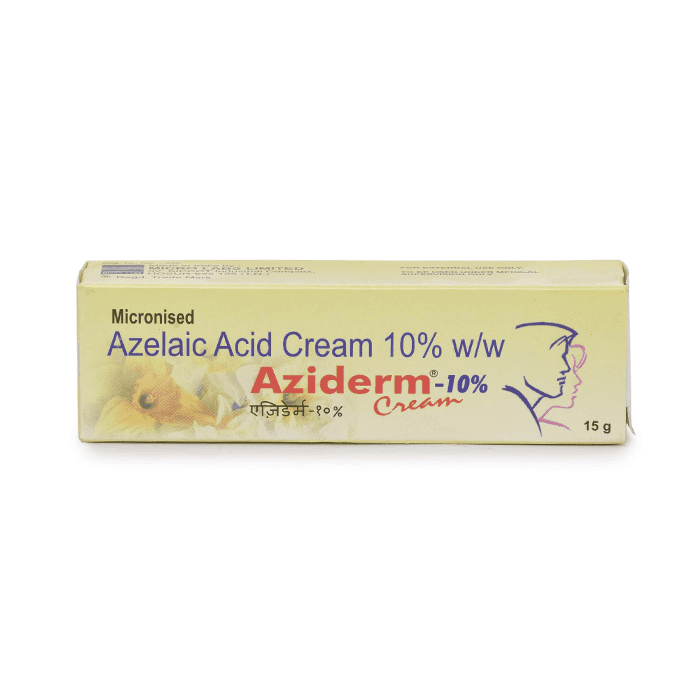 Aziderm cream 10% is a well-known agent used in the treatment of skin- related symptoms especially acne. It is a topical agent being manufactured by Micro Labs Pvt Ltd in India. The core ingredient is Azelaic acid which is one of the most effective molecules used in pigmentation-related problems of the skin. The drug is being sold in the USA under the name Finacea cream 10%.

As mentioned, Aziderm cream is one of the most preferred drugs prescribed by dermatologists across the globe to tackle various skin issues. It is mainly used in treating acne and enhanced pigmentation of the skin. The active component is Azelaic acid which acts by killing the bacteria responsible for acne. It also reduces the pigmentation in the affected areas.
Aziderm is available in different formulations like cream, gel, suspensions and even serums (which are new in the market). It comes in different concentrations like 10%, 15% and 20 %. There are many brands of Azelaic acid which are available in the current drug market:

About salt of the drug:

The effectiveness of Aziderm cream is solely due to the presence of Azelaic acid as the Active Pharmaceutical Ingredient (API). It is a dicarboxylic acid found in many grains like rye, wheat and barley. It is produced by a kind of yeast that normally lives on normal skin. It is highly operative against many bacteria that cause infections in the skin. It can be moulded into many types of formulations as mentioned above.

Aziderm cream is currently being utilized in many indications of the skin. It offers an effective remedy for the following:
• Acne vulgaris- commonly called pimples; caused by bacteria that thrive in hair follicles clogged with fatty substances
• Erythema- redness of the skin
• Rosacea- bumps on the skin which are often red in colour and is filled with pus
• Hyperpigmentation- dark patches on the skin

There are two main activities of Azelaic acid that aids it in fighting many skin conditions. The most important is its ability to prevent the growth of bacteria in the areas affected by acne and rosacea. It blocks the activity of many crucial enzymes. Thereby, the drug inhibits the synthesis of many proteins which are essential for the growth and stability of the bacteria.
In addition, Azelaic acid also checks the DNA synthesis in melanocytes (cells which are responsible for the darkening of the skin). It has an antityrosinase activity which helps in lightening the affected area.

Since Aziderm cream is a topical agent directly applied on the affected areas, most of the side effects are limited to the area of contact. Most of them are minor and might be observed during the initial days of treatment
• Burning or stinging sensation on the skin (where the drug is applied)
• Tingling feeling in the skin
• Pruritus- an uncomfortable itching sensation
• Dryness of the skin
• Increased redness of the skin
• Oedema or swelling in the part where the cream is applied
• Inflammation of the skin
• Formation of pimples
You have to get medical aid if the above effects persist for two or more days.

It is advised to keep an eye on the given points to achieve maximum benefits out of Aziderm cream:
• The frequency of application is as per instructed by the physician
• Read the instructions given in the leaflet provided along with the cream
• Clean and dry the affected area
• Take a small amount of the cream and apply a thin layer over the affected area
• Do not rub the same area for a long time unless instructed by the doctor
• Wash your hands after application unless the skin problem is in your hands
• Continue the medication throughout the period mentioned in the prescription
• Do not discontinue its use or change the frequency of application without consulting your doctor

Drugs that are known to interact with this medicine:

Even though Aziderm cream is an external agent, it is absorbed into the bloodstream from the area of application. Hence, there are chances of interactions with both internal and external medications.
• Antiretroviral drugs- the excretion of drugs like acyclovir is reduced due to Azelaic acid and hence increase its serum concentration leading to toxicity
• Non – steroidal anti-inflammatory agents- there is a chance of an unwanted increase in Azelaic acid concentration when taken with aceclofenac and diclofenac
• Isotretinoin- there are chances of adverse effects when Aziderm is used along with isotretinoin
• Antibiotics like amoxicillin and amphotericin show higher blood concentrations when used with Aziderm

When to avoid taking this drug:

Aziderm cream is to be used with caution under the following situations:
• If you have any pre-existing condition of hypersensitivity towards Azelaic acid or any other similar components inform your doctor
• After using Aziderm cream initially and there is an adverse reaction, avoid the subsequent use of this drug
• It is advised to avoid using Aziderm cream if the patient suffers from any asthma-related issues. Reports have been shown to increase the asthmatic effects when Aziderm cream is used in such patients

Things to avoid while taking this drug:

Certain things to be avoided to get maximum efficiency of Aziderm cream:
• Do not apply a thick layer of Aziderm cream over the affected area
• Do not use any type of wrapping or dressing over the infection or inflammation after applying the cream
• Moisturizers or other dermatological agents should not be applied on the affected area before or after using the medication
• Avoid concurrent use of any other medications without consulting a dermatologist
• Do not wax the area as it might cause irritation

• Consult a Registered Medical Practitioner before using Aziderm cream
• Follow the dosing instructions given and those given in the leaflet
• Apply a thin layer on troubled area
• If you observe any kind of adverse reactions like persistent itching or painful inflammation, inform your doctor immediately
• Do not discontinue use of Aziderm cream without consulting your doctor
• Make sure the medication stays on for a time good enough to get desired results; you can wash the area with lukewarm water and a mild soap

• Pregnancy- there are no possible side effects of the drug in pregnancy stages; adequate studies are to be conducted further to establish any similar claims
• Lactation- it is safe to use the drug during lactation; there are no reports of unwanted effects on the feeding baby or nursing mothers
• Alcohol- there are no reactions between alcohol and Aziderm cream
• Internal use- the medication is intended for external use only; do not apply it in the eyes or vaginal area

Aziderm cream is to be stored under the following storage conditions:
• Keep the cream away from direct sunlight as there are chances of leaking
• The cap must be tightly closed after use in order to prevent the entry of moisture
• Aziderm cream should be kept in a place away from the reach of children and pets so that they do not consume the drug
• The optimum storage temperature is between 15 – 30 degree Celsius
• Do not refrigerate the drug unless mentioned by the physician or the pharmacist

Can I use Aziderm cream if I have a vaginal infection?

Ans. No. Aziderm cream is strictly used for external purposes only. Application of Aziderm in the vaginal area can cause adverse effects.

If I get an itching sensation on applying Aziderm cream should I discontinue its use?

Ans. No. If the itching is persistent or painful, then consult your doctor. Usually, the itching recedes on its own.

Can I apply moisturizer over the affected area along with Aziderm cream if I have dryness of the skin?

Ans. No. It is advised not to use a moisturizer on the affected area before you apply the medication. You might not get full benefits of the drug.

Should I cover the area with a bandage once I put the cream.

Ans. No. It is not required to cover the area with a cloth or bandage after applying Aziderm.